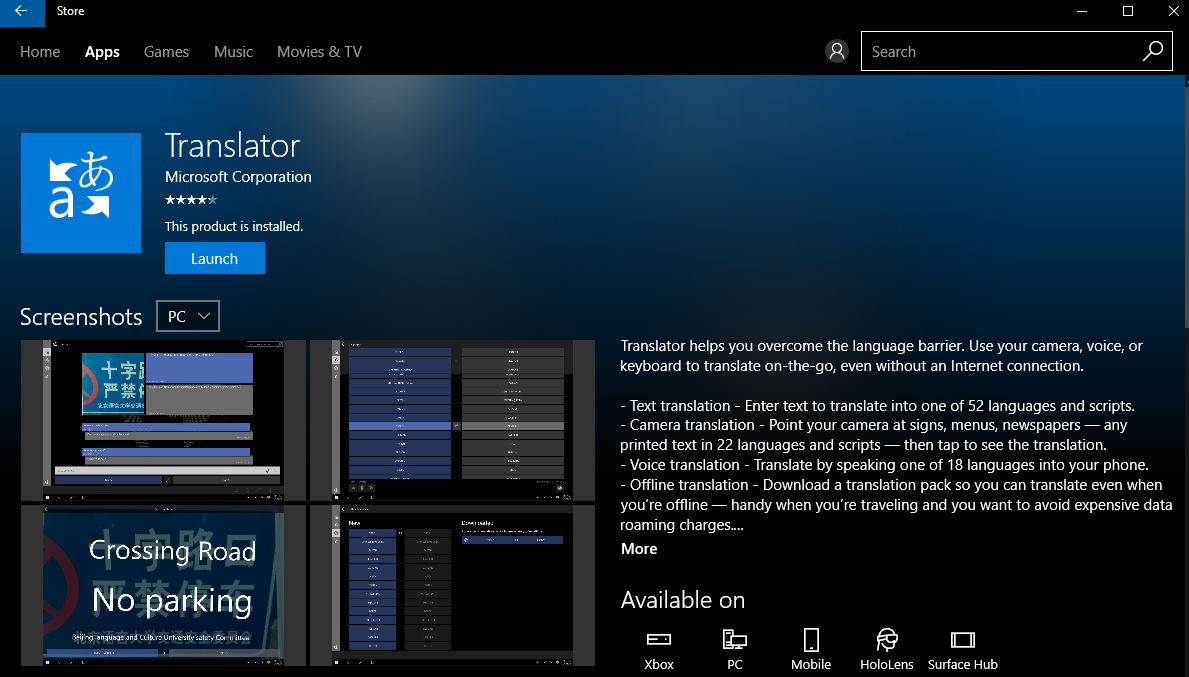 I’ve been playing around with Windows 10 a bit more recently, especially as the anniversary update has come out and there’s a new ‘Dark’ theme (if the screenshots don’t make it too apparent I kind of love the theme). As I’ve been poking around, I came across the official Microsoft translator app in the Windows store. After playing around with the app I bit, I thought I would introduce how it works and share some useful tips about it as well.

The App and Settings

The interface is a bit odd, since it’s a bit different from other Windows 10 apps (with the share, copy and edit buttons at the bottom). It can also be a little cumbersome to figure out exactly how things work, such as the “Settings”/ “About” page carries so much information on it:

Some nifty features here, though:

The translation page takes cues from an online chat, and it looks like you’re having a dialog with a translator:

You can add input by typing it in, using the microphone (listening to the TV, news, or playing an audio clip off of YouTube seemed to work fairly well), and take a picture to scan it. Of course you can use a webcam, but since this computer doesn’t have one, I didn’t get the chance to test that out.

You switch languages by clicking on the language name below, and it’s pretty easy to flip between the two. The translations themselves seem okay, although half of the book title punctuation was missing from the translation for some reason.

You can play audio for both the English and Chinese, and I found the voices to be pretty good and not too mechanical sounding. It may take some effort to pick out the tones, but otherwise it isn’t actually too bad.

You can also favorite the translation and view them using the Favorites link on the side menu.

Using the menu below, you can share it with different apps, copy it, edit it or delete it from the ‘chat history’.

Using the “languages” icon (the one below the house icon) brings you to a list of languages where you can choose to translate from. It’s really the same page you get to when you click on the language name at the bottom of the page seen in the image above.

Conversion Junction, it has that function~

You can even do Traditional <> Simplified character conversion within the app:

You can download language packs to use offline, but right now it only has Chinese Simplified available.

This really isn’t a bad app to have around. If nothing else, I like the easy access to audio and, more importantly, being able to do Simplified to Traditional conversions. I wouldn’t say it beats out using Google translation, but having it just a Windows key away is kind of nice, rather than having to go through the browser.

Have you tried out the app? What do you think? Let me know in the comments below!